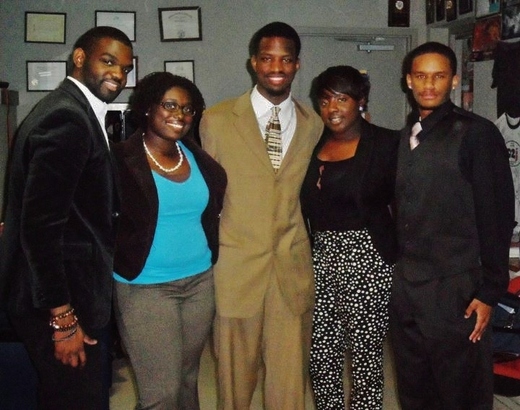 (L-R) Justin L. Martin, Misha Faith Whatley, Salimatu Nelson & Cody McKale Dean
Jacksonville State University students Justin L. Martin, Misha Faith Whatley, Salimatu Nelson and Cody McKale Dean came together on the night of March 9, 2012 to celebrate the the six month anniversary of the Late Nite With Ed Moore III show. During the show, Ed expounded on the blessings he has received since the show premiered last September and some of this biggest shows that have been taken on since the show's premiere. The panel of students also discussed the formats of other American based talk show hosts, the different ways they go about hosting their own talk shows as well as other late night talk shows they favor most. During the show, Ed mentioned a plethora of other talk show hosts that he says have influenced the intricate format for Late Nite With Ed Moore III such as Oprah Winfrey, Dr. Drew, Nancy Grace and Dr. Phil. As done in the season one finale, Ed shared with the listening audience lessons he has learned from hosting the show for the past six months.
"Congratulations on the 6th month anniversary of Late Night with Ed Moore III. I have been very impressed with the show's topics and the professionalism shown by Ed Moore as the show has developed over the past six months...' - Terry Casey, Director of Student Life, Jacksonville State University

"When Ed came to me last summer with his idea for a talk show that discussed topics of real interest to college age people, I knew he would do great things. He has done nothing but excel both personally and professionally over the last six months. I wish him the best in all of his future endeavors. I know he has bigger and better things ahead of him. Congrats for six strong, smart months..."  - Thad Burton, Former Program Director, WLJS

"Ed, Congratulations on your six month anniversary. I appreciate your hard work in keeping our campus and community informed and using your show as a forum for public discussion..." - Dr William A. Meehan, President, Jacksonville State University (Guest From Show #013, Hazing In America Special)