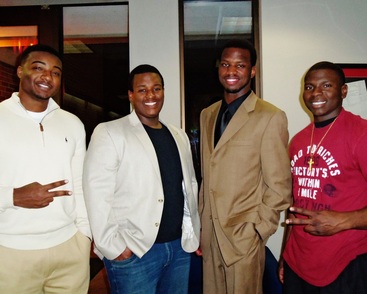 (L-R) Samuel E. Pugh, Nur Chernnet & Cortez Etchison
Show #014, featuring WLJS broadcasters Cortez Etchison & Nur Chernnet as well as WLJS guest-regular, Samuel E. Pugh, took a deeper look into the world of men within the radio entertainment and media industry. During the show, the gentleman discussed the highs, lows, strides and controversies surrounding the most well known male radio talk show hosts in history. During the show, the gentleman discussed the benefits, challenges and responsibilities they believe are a part of working within a heavily surveillant, social and paparazzi-driven industry. Conversation regarding the record breaking salaries of American radio personalties, Howard Stern and Rush Limbaugh brought about insightful dialogue as to whether or not going the extra mile in radio earns you the bigger dollar. During the show, Etchison and Chernnet discussed what they have learned as men working within the field of radio and the legacies they hope to leave behind within their respective careers. Being a regular on WLJS shows, Pugh explained the responsibilities that accompany the opportunity of being a guest on radio talk shows and the importance of treating such a position with honor.

"The fact that God has blessed me with this platform of being a radio-talk show host, I don't want to use this position as a way to bash, criticize and spit out controversy. I want to use this show as something everyone can get a piece of and be blessed by it..."  - Ed Moore III