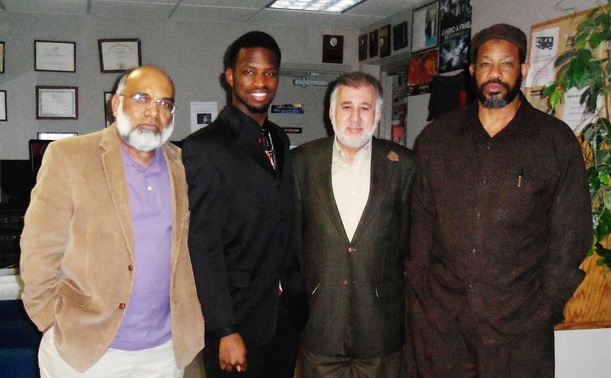 (L-R) Muhammad N Haq, Dr. Safaa Al-Hamdani, Jerome Sabree (Anniston, Alabama Islamic Center)
A night combined with the powerful realms of tolerance, courage, empowerment, effective communication and understanding, members of the Anniston, Alabama Islamic Center, Dr. Saffa Al-Hamdani, Muhammad N Haq and Jerome Sabree, convened at WLJS Studios on the night of March 2, 2012 to expound on the religious beliefs within the Muslim community, possible misunderstandings about the Muslim community and the challenges faced within the Muslim community since the terrorists attacks on New York City and Washington D.C. on Tuesday, September 11, 2001. Throughout the show, the gentleman explained that what occurred on September 11th was an inadequate representation pertaining to the true beliefs of the Islamic society. The panel brought about explanation which revealed the true beliefs of the Muslim community, beliefs that were far from the images displayed on the world's television screens from that Tuesday morning back in 2001. Dr. Al-Hamdani, who is also a professor of biology at Jacksonville State University, explained of the additional attention that he has received in American airports since the September 11th attacks and the importance of individuals sitting down and having informative conversation. During the show, Ed mentioned that as a child, he always knew the Islamic community held a much bigger story than the media's presentation while paralleling with the difficulty of whole heartedly believing exaggerated information given to him about Muslims throughout his life.

"For the past eleven years, a part of me always knew there was a much bigger story to the Islamic community than what I had been seeing on the television screen for all this time. Unfortunately, there was nobody around or close enough in my life to tell me the truth. Now, I know...." - Ed Moore III